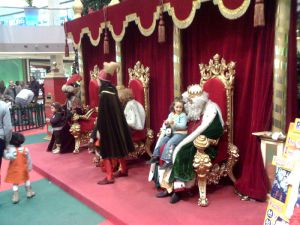 Now I’ve been teaching about Christmas traditions within my level 1B classes.

Here are a few documents connected using these songs:

We took in to those songs for a few days, then today they started class by doing the cloze activity.

Yesterday, additionally to hearing the two songs, we viewed this video:

Afterward, we discussed it and circled it TPRS style.  I put words around the board for example pata, le duele, pide, regalos, trineo.  We did a very nice discussion and also the kids even determined the commercial was associated with the economical crisis in The country.  After plenty of circling from the storyline, the children did someone retell.

Today, after doing the cloze using the two songs, we discussed what we should learn about Papá Noel (in Spanish obviously!) already.  I had a number of yesterday’s words around the board too.

I authored around the board:

I demonstrated them this video and requested these to watch and then try to choose a minimum of 5 words they might understand (it’s a real tough one!):

Then, they shared the words they understood (they did amazing!).

We discussed again, referring to our Papá Noel discussion.  How lots of men exist?  Are they Santa?  No, they’re nobleman.  How many nobleman exist?  What are these nobleman known as in British (wise men).  Do the wise men ride a sleigh?  No they ride camels.  Are all of them white-colored?  No, the first is black.

I Then let them know (in Spanish) that in The country, there’s two days when kids receive gifts!  When does Papá Noel come?  When perform the 3 nobleman come?  (I needed to let them know)  It was an excellent discussion!

We appeared with this particular video:

Finally, I’d them write just a little comparison of Christmas in the united states versus Christmas in The country.  I had my less strong class perform a Venn diagram in groups first.

I’m wishing to perform a little fun follow-up after break and perhaps ask them to released footwear for any little treat!

Raisa Anvar: all of you out there reading this comment I wish you all a merry Christmas and a happy new year﻿

Wilner Saintil: Raisa Anvar wish you a merry Christmas to﻿

Elisha Padilla: After i watch Katherine's and Rachael's videos I feel so festive like if you agree﻿

Itzz Princess: when you notice you live by Rachel and Katherine, OMG﻿

Ava's Channel: Purple Princess I don't even live in there country and my mom we'll definitely not move so I'am a 0%﻿

Lacey I love Glossop: Purple Princess do you live near them hunXx﻿

anna is not a failure: MY NAME WAS ON THE NICE LIST\nIT SAID ANNA\n\nTHAT JUST MADE MY CHRISTMAS\n\n\n… I lead a sad life ;3﻿