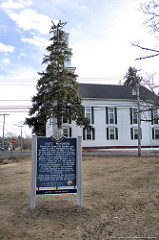 The Windsor Historic Society’s Museum is situated in the historic “Hembree House”, situated next door from the regal row of Cypress trees at 9225 Foxwood Drive. The trees once lined the front yard towards the Cunningham Ranch and were grown by Clara Hembree’s father, James McClelland, around the occasion of her birth in 1872. Clara Hembree’s grandfather, Robert Cunningham settled the homestead in early 1850s. The home eventually passed to his granddaughters, Clara and Ella.

Clara and Dr. Atlas Hembree built their Spanish style retirement home in 1931 around the family ranch.  The home had continued to be in the household for more than a century when, following the dying of Mrs. Hembree, the homestead was offered towards the William Matson Roth family. It had been then offered towards the Mabry family who established the Landmark Winery. Because the capital of scotland- Windsor increased and house squeezed the vineyards, the winery moved and also the Hembree House was purchase through the Windsor Water district and finally the city of Windsor.

The museum opened up in Feb of 2009 featuring exhibits around the people and occasions that formed the Windsor’s history. One of the permanent exhibits may be the heroic story of Fred Wiseman who built the very first all California plane, trained themself to fly after which delivered the world’s first airmail! Another exhibit informs the storyline of German Prisoners of War that spent a number of The Second World War in camps in California, including one out of Windsor!

Inside a dedicated gallery may be the work of rancher, inventor, horseshoe champion and artist, George Greeott. Mr. Greeott has resided on his ranch near Windsor since 1928 and besides his stunning iron spike figures and delightful wood carvings has additionally collected a sizable assortment of historic products from his family’s past.

LUNITIC WILL: i used to live on a farm that was on of the biggest sugar beet farms in colorado pre 1965﻿